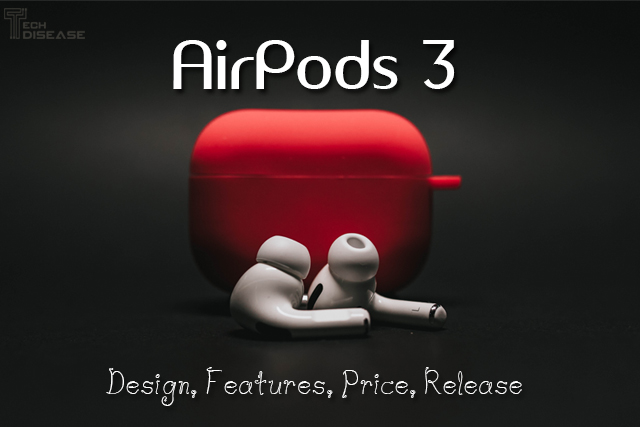 Apple decides to give us two headliners for the month of March, the discontinuation of HomePod and the new Apple AirPods 3. Well, the latter, not so official yet!

It has been two years since the last AirPods version hit the market and practically turned it over in sales. But the recent rendering and design leaks by 52audio and other trusted sources hint at a possible reveal of the new wireless earplugs. And with the Apple Spring Event around the corner on March 23rd, we could be in for a treat!

Finally, after putting up with AirPods Pro and AirPods Max’s premium releases, we might get our hands on a more affordable model this year. Although the rumors of AirPods 3 releasing in 2020 bore no fruit, chances seem pretty positive after Jon Prosser, the infamous leaker, hinted at a possible reveal on March 23rd as well.

Will we see a new design, features, tips, and a different price tag with the new release? Let’s find out!

The rumors of Apple AirPods 3 coming out have been flooding the market since the Pandemic began last year. Though the fire was put out soon after the lockdown, it is rekindled with the approaching Apple Spring Event.

52audio, a trusted website with accurate leaks of unreleased products, gave out their predictions in February. However, predictions from such sources are usually insights and potential leaks, as we have seen in the previous versions.

LeaksApplePro is another authentic source that posted a photo similar to the current AirPods Pro design earlier this month. And more recently, Ming-Chi Kuo(Reliable Apple Analyst for Asia) backed up the resemblance claim by stating the new design will feature a shorter stick.

The overlapping of these rumors around the upcoming Spring Event gives us a certainty to expect something from Apple. And that too as soon as by the next few days, or weeks at most!

Besides chasing the latest Apple products, you might want to install iMessage on your PC to get the most out of the existing features and apps provided by the California Giant.

No official word has been heard from the California Tech giant about the release of their latest hardware. But we do get strong hints towards Apple’s spring event in March 2021 from renowned analysts and leakers.

Although Ming-Chi Kuo predicted the Apple Airpods 3 release date in the first half of 2021 last year, he believes it will be available to the public somewhere in the 3rd of 4th quarter of 2021 from his recent leak.

Inventec, Apple’s supply chain partner, will still handle the production of the new Apple hardware this year. Though, it will not account for more than 20% of the total production. We learn this from DigiTimes via wccftech.com.

Another report by Bloomberg suggests that there will be multiple products released in the first half of 2021. Along with Apple AirPods 3, we might catch a glimpse of Apple AirPods Pro 2 and a new HomePod design.

Although the launching of too many adjacent and similar products is hard to believe, the AirPods Pro 2 rumors are further verified by Macworld. This Apple-specific platform gives useful and accurate predictions.

Considering we haven’t seen a new line of products from Apple for over two years and how the rumors are all coming together, we can surely say we’ll soon be hearing about these new AirPods during this year, whether it is the first half of the year or the second.

The only thing that keeps us glued to leaks more than the design of an Apple product is its price. Especially if the release is prolonged and the previous versions seeing an exponential climb in the graph.

However, rumors suggest that the new AirPods 3 coming out sometime this year will be cheaper than the AirPods Pro. Apple AirPods Pro, which featured a wireless charging case and Active Noise Cancellation, went up as high as $249.

But, seeing as there won’t be an Active Noise Cancellation in the AirPods 3 and neither the Spatial Audio, the price may be more similar to its predecessor’s line, AirPods 2.

Apple experts and analysts locked their prices at $159 for the new AirPods 3. And that is if we do not see any expensive features added to the earplugs. Also, Apple might be using the same chip it used for AirPods 2, which could be a potential giveaway for a lower price.

But we still never know! After all, Apple has a history of putting premium price tags on its products. Since Apple’s brand loyalty hits a record high this month, there probably will be no stopping the sales even if we see a higher price than expected.

Unlike the whispers about a revamped design for AirPods 3 going around, we might get a design based on AirPods Pro.

Photo leaks from Gizmochina, LeaksApplePro, and 52audio all point towards an AirPods Pro upgrade design. Also, a rendering image from a Chinese site also stamps on the previous look predicted by analysts.

The biggest design innovation that we notice from leaks is the replaceable tips on the AirPods 3. The new earbuds will feature a shorter stem and will not include stock tips to adjust to your ear size. Moreover, the casing has shrunk as well. And that might mean you won’t have space in the case to fit your AirPods tips along with it.

Rumors going around also hint towards a wireless charging case for the AirPods 3. But if that’s true, we might be seeing a price spike than the predicted $159.

Another main design aspect we notice is the pressure-release vents to the side of the AirPods 3. These resemble AirPods Pro as they improve hearing assistance and health. Talking about health, the new AirPods 3 may even feature health options as blood-pressure and heartbeat sensors. And this new feature might be the first step towards a smartwatch replacement.

Though the Active Noise Cancellation (ANC) and Spatial Audio are still in doubt, they’re probably going to be a highlight feature to the new Airpods 3. Not to forget that extra features mean a higher price tag.

The new AirPods 3 might also be in line for integration with Apple’s new release AirTags.

Coming over to battery life, the new AirPods does not include a battery upgrade. According to rumors, you’ll still get the same 1-1.5 hours of live time over 15 minutes of charge. And while that could be a potential downside, how much more can you expect from such a limited hardware space?

We have long known apple to break the benchmarks for their products with each new release. But can the same be said about the new AirPods 3?

Based on the design and features the rumors suggest, they do offer improvement at value. More bang for the buck is always a good thing to lure customers. However, the addition we’ll really like to see in the new design is a wider range of colors than the trademark white.

But even if the color additions are considered, we may not get a color range of more than Apple’s original line. It may not be very much of a difference, but still a lot better than the monotonous color we’ve been putting up with for 4 years now.