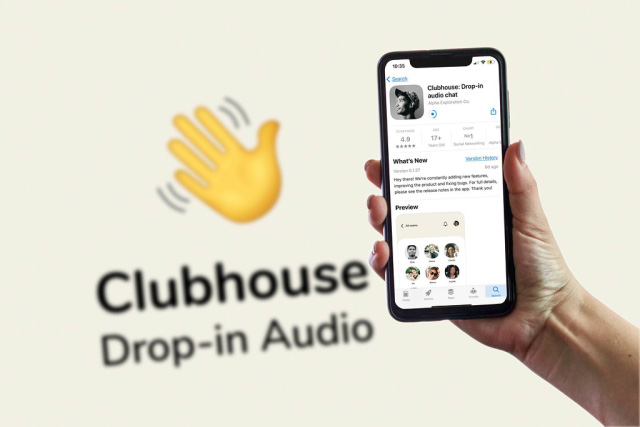 The podcast revival or talkback radio, what’s there that we don’t know about the iPhone-only Clubhouse social app?

To enter the US with COVID, Clubhouse was launched in the March of 2020. It is an audio space app that allows you to connect with like-minded people in a manner different than we’re used to on social media, without photos, videos, and advertising.

Listening to compelling interviews and conversations of interesting people and actively contributing is what the new app offers. But if it’s more of a live podcast, what’s all the hype about?

What Is Clubhouse And How It Works?

Clubhouse audio app is an exclusive entry app that allows you to join or host “rooms.” You can conduct or listen to conversations about science, business, personal development, politics, religion, and whatnot.

The app rooms resemble a conference hall, but with a slight difference, not all of the participants can contribute. Although there is an option to “Raise Hand” that allows you to contribute to a conversation, it is usually not available in rooms with large attendances.

Unlike the broadcast platforms we know like YouTube and Twitch, a room’s content expires after the session and cannot be saved. And each room has moderators, speakers, and listeners—the moderator control who gets to host the channel and who gets a chance to speak.

Find out more about how you can benefit from social media over here.

Why Is It Exclusive?

We all know you can’t just download and register for Clubhouse. That’s probably the only way you’ve heard about it. Only a previous member of the platform can send you a Clubhouse app invite. And that’s what gives it more of a virtual Country Club feeling.

Although critics argue it to be a publicity stunt (which is working!), it is more of an infrastructure failure. The gradual addition of members gives the creators enough room to work out expansion without compromising the quality provided.

You get one free invite upon joining, but you can earn more by hosting rooms and being active on the platform. However, it’s not going to remain that way as Paul Davison and Rohan Seth (creators) are already planning on expanding to the Google interface, Android.

The rapidly growing user interface from Silicon Valley has reached over 10 million active weekly users from a total of 1500 when they started last year, which is a huge jump. It only tells us about the potential this has for growth.

The fact that the audio-only app doesn’t record any conversation in a room gives the platform higher privacy and security. But, there are always people out there that are going to violate that.

Elon Musk’s recent hosting on Clubhouse brought some serious attention to the platform, but it also highlighted a privacy concern. The entire broadcast was uploaded on YouTube for wider coverage, but who’s to say other people won’t do the same with negative intentions?

Several users report cases of harassment, racism, and bullying over the platform. And the inability to report or block a contact raises a higher question of security.

Also, there are rumors about China tapping and listening to conversations due to a surge in active-users. Since Clubhouse invites found their way to the black-markets, the room content is highly unregulated and unsupervised.

But the audio-only app has not even seen its first birthday yet, so we can grant it some more time to find fixes. After all, the novel rise in popularity is not something the creators could’ve seen coming. All in all, we hope it is going to be a much safer platform to voice opinions in the future.

There are two types of people who find the Clubhouse voice app useful. Those that have something to share and those who want to learn.

Celebrities, influencers, life coaches, and businessmen are the leading hosts on the platform. Not only can you share and listen, but you can connect with like-minded people too. And that’s what has fueled the rapid popularity of Clubhouse among Entrepreneurs.

Drake, Kevin Hart, and Tiffany Haddish are the top entertainers stepping into the broadcast. Listening to a personality or influencer you like in live arguments is what the audio-only app introduces us to.

How To Use Your Invites?

Since it is a free-voice interface, there will be people who bend it for their needs. And that’s where you have to be careful, at least until it’s available to the entire public.

Because Clubhouse mentions the name and profile of the person who nominated you on your profile, you have to be watchful of who you grant these rights to. And you do not have a lot of invites to distribute in the first place.

The fact that you are always connected to the person who nominated you and who you nominate makes the whole thing a bit skeptical. You never know what another person might indulge in on the app and how it may turn out for you.

Is Clubhouse A Podcast?

It is more of an interactive podcast. It is a passive way of learning and entertainment on the go. But with the opportunity to add something of value to an ongoing conversation.
However, the main difference is that the entire conversation is lost after you close a room. You can schedule rooms to attract a large following before it begins, but that all!

A host can run a series of room discussions or interviews in the same niche, which resembles a podcast. So, we can conclude that it’s rather a mix of radio, podcast, and conferences, and not anyone is specific.

The biggest and only competitor of Clubhouse is Spaces by Twitter. Although Twitterzis may have the advantage of a huge initial following, they still may not counter an entire audio space platform.

How To Register For Clubhouse? You can only get access to the app if you’re an iPhone user and you have an invite from an existing member. However, you can still get the app from App Store, book yourself a username, and you might get access somewhere in the future. But there is still no guarantee that you will ever be entered into the highly elite social interface.

Grow Your Business With The Top 10 Social Media Management Tools